The career military officer (Colonel Oguna) was appointed in August 2018 to take over from Mr Eric Kiraithe who has been serving in the position since August 2018. 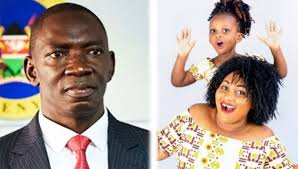 Cyrus Oguna MUST  be the best government spokesman of Kenya. After the Likoni Ferry accident where the car with tow occupant Mother and daughter. Plunged into the ocean, Kenyans had a privilege to listen to him most times during the underway efforts of retrieving bodies at the Likoni tragedy.

During the exercise, on October 5, 2019, Raila paid a visit to the underway operations and as the AU envoy, he gave the executive order on dredging. However, Cyrus Oguna acted soberly, took a balance and explained himself out without injuring the prime minister or blame those involved absolving the government.

When private divers threatened to withdrawal due to misunderstanding with the Navy. Cyrus Oguna took a brave face and gave a measured statement. He sighted streamlining operations under the Kenya Navy.

When Kenyans were frustrated that the exercise was taking long and started attacking the government on social media. He explained well, that it was not easy. The terrain is bad, rugged down there. Even the lives of divers were in danger. He was always full of hope to the family and the Kenyans.

In addition to Cyrus Oguna Accolades

The moment the experts were brought from South Africa... He maintained the Navy is up to the task but needed support and equipment to succeed.

In addition, when the vehicle was sighted. He gave a press statement that something like a vehicle has been seen in the base of the ocean but he also added that the divers have to go down there and ascertain whether it is the same vehicle we are looking for.

On 10th October when the vehicle was identified. He gave a press-release that "we are after bodies and due diligence need to be taken." And the life of divers should be guaranteed. All through the exercise, Cyrus Oguna gave hope and good communication taming and putting into control the sensational media reporting with the bereaved family in mind until the end. His was eloquent reporting facts.