In this websiet we have been writing many articles about reducing weight using low carb/ketogenic diet methods. Among the many read and recommended Low Carb Diet foods associated articles include: 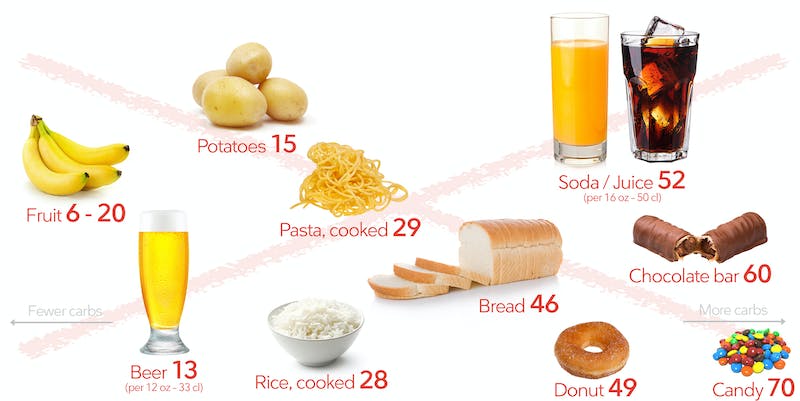 Some high-carb foods obviously need to be avoided, such as sugar-sweetened beverages, cake and candy. The control or avoidance of these foods can go a long way to reducing weight and other conditions such as diabetes.

However, figuring out which staple foods to limit is more challenging.

Some of these foods are even relatively healthy, just not suitable on a low-carb diet because of their high amount of carbs.

Your total daily carb target will also determine if you need to limit some of these foods or avoid them altogether. Low-carb diets typically contain 20–100 grams of carbs per day, based on personal tolerance.

Here are 14 foods to avoid or limit on a low-carb diet.

Bread is a staple food in many cultures. It comes in many forms, including bread loaves, rolls, bagels and flatbreads, such as tortillas.

Unfortunately, all of these are high in carbs. This is true for whole-grain bread as well as bread made from refined flour.

Although carb counts vary based on ingredients and portion sizes, here are the average counts for popular breads:

Depending on your personal carb tolerance, eating a sandwich, burrito or bagel could put you near or over your limit for the day

BOTTOM LINE:Most breads and grains are too high in carbs to include on a low-carb diet. This includes whole grains and whole-grain bread.

A high intake of fruits and vegetables has consistently been linked to lower cancer and heart disease risk .

However, many fruits are high in carbs and may not be suitable for low-carb diets.

A typical serving of fruit is one cup or one small piece. For instance, a small apple contains 21 grams of carbs, 4 of which come from fiber.

On a very low-carb diet, it's probably a good idea to avoid some fruits, especially sweet fruits and dried fruits, which have high carb counts:

Many are very high in fiber, which can help with weight loss and blood sugar control.

However, some high-starch vegetables contain many more digestible carbs than fiber and should be limited on a low-carb diet.

And if you're following a very low-carb diet, your best choice is to avoid these starchy vegetables altogether:

Here is a list of the best low-carb vegetables you can enjoy freely on a low-carb diet.

BOTTOM LINE:Although many vegetables are low in carbs, some are actually quite high. It's best to choose mostly non-starchy, high-fiber vegetables.

Pasta is a versatile and inexpensive staple food, but it's also very high in carbs.

Whole-wheat pasta is only a slightly better option at 37 grams of carbs, including 6 grams of fiber (22).

On a low-carb diet, eating spaghetti or other types of pasta isn't a good idea unless you consume a very small portion, which isn't realistic for most people.

If you're craving pasta but don't want to go over your carb limit, try making spiralized zucchini noodles ("zoodles") or shirataki noodles instead.

It's well known that sugary breakfast cereals contain a lot of carbs.

However, you may be surprised at the carb counts of healthy cereals.

For instance, one cup of cooked regular or instant oatmeal provides 32 grams of carbs, only 4 of which are fiber.

Steel-cut oats are less processed than other types of oatmeal and generally considered healthier. However, a mere half cup of cooked steel-cut oats has 29 grams of carbs, including 5 grams of fiber.

Depending on your personal carb goal, a bowl of cereal could easily put you over your total carb limit for the day — even before milk is added.

BOTTOM LINE:Even healthy whole-grain cereals are high in carbs and should be avoided or minimized on a low-carb diet.

Alcohol can be enjoyed in moderation on a low-carb diet. In fact, dry wine has very few carbs and hard liquor has none.However, beer is fairly high in carbs.A 12-ounce (356-gram) can of beer contains 13 grams of carbs, on average. Even light beer contains 6 grams per can.What's more, studies show that consuming carbs in liquid form tends to promote weight gain more than getting carbs from solid food.That's because you don't compensate for those liquid carbs by eating less later.

Yogurt is a tasty, healthy and versatile food. Although plain yogurt is fairly low in carbs, many people tend to eat fruit-flavored, sweetened low-fat or nonfat yogurt.

Unfortunately, sweetened yogurt often contains as many carbs as a dessert.

One cup of nonfat sweetened fruit yogurt can have up to 47 grams of carbs, which is even higher than a comparable serving of ice cream (30, 31).

However, choosing a half cup of plain Greek yogurt topped with a half cup of blackberries or raspberries will keep digestible carbs under 10 grams.

BOTTOM LINE:Sweetened low-fat or nonfat yogurt often has as many carbs as ice cream and other desserts.

Juice is one of the worst beverages you can drink on a low-carb diet.

Although it provides some nutrients, fruit juice is very high in fast-digesting carbs that cause your blood sugar to increase rapidly.

For instance, 12 ounces (368 grams) of unsweetened apple juice contain 48 grams of carbs. This is even more than soda, which has 39 grams. And unsweetened grape juice provides a whopping 60 grams of carbs per 12-oz serving.

Even though vegetable juice doesn't contain nearly as many carbs as fruit juice, a 12-ounce serving still has 16 grams of carbs, only 2 of which come from fiber.

What's more, juice is another example of liquid carbs that your brain's appetite center doesn't process in the same way as solid carbs. Drinking juice can lead to increased hunger and food intake later in the day .

BOTTOM LINE:Fruit juice is a high-carb beverage that should be limited or avoided, especially on a low-carb diet.

A wide variety of salads can be enjoyed regularly on a low-carb diet.

However, commercial dressings often end up adding more carbs than you might expect, especially low-fat and fat-free varieties.

Many people commonly use more than two tablespoons, particularly on a large entree salad. To minimize carbs, dress your salad with a creamy, full-fat dressing.

Better yet, use a splash of vinegar and olive oil, which has protective effects on the heart and may also help with weight loss (38, 39).

BOTTOM LINE:Avoid fat-free and low-fat salad dressings, which are typically high in carbs. Use creamy dressings or olive oil and vinegar instead.

Beans and legumes are nutritious foods.

They can provide many health benefits, including reduced inflammation and heart disease risk (40, 41, 42, 43).

Although they're high in fiber, they also contain a fair amount of carbs. Depending on personal tolerance, you may be able to include small amounts on a low-carb diet.

Here are the carb counts for one cup (160–200 grams) of cooked beans and legumes:

BOTTOM LINE:Beans and legumes are healthy, high-fiber foods. You can include small amounts on a low-carb diet, depending on your daily carb limit.

11. Honey or Sugar in Any Form

You're probably well aware that foods high in sugar — such as cookies, candy and cake — are off-limits on a low-carb diet.

However, you may not realize that "natural" forms of sugar can have as many carbs as white sugar. In fact, many of them are even higher in carbs.

Here are the carb counts for one tablespoon of several types of sugar:

To sweeten foods or beverages without adding carbs, choose one of these healthy sweetenersinstead.

BOTTOM LINE:Avoid sugar, honey, maple syrup and other forms of sugar, which are high in carbs but low in nutrients.

Chips and crackers are popular snack foods, but their carbs can add up quickly.

Crackers vary in carb content, depending on processing. However, even whole-wheat crackers contain about 19 grams of carbs per ounce, including 3 grams of fiber (55).

Processed snack foods are typically consumed in large quantities within a short period of time. It's best to avoid them, especially if you're on a carb-restricted diet.

BOTTOM LINE:Avoid eating chips, crackers and other processed, grain-based snack foods while on a low-carb diet.

Milk is an excellent source of several nutrients, including calcium, potassium and several B vitamins.

If you're only using a tablespoon or two in coffee once a day, you may be able to include small amounts of milk in your low-carb diet.

However, cream or half and half are better options if you consume coffee more frequently since these contain minimal amounts of carbs.

If you enjoy drinking milk by the glass or use it to make lattes or smoothies, consider trying unsweetened almond or coconut milk instead.

BOTTOM LINE:Adding a small amount of milk to coffee once a day is unlikely to cause problems on a low-carb diet. However, you shouldn't drink it in large quantities.

Gluten is a protein found in wheat, barley and rye.

Gluten-free diets have become very popular in recent years, and are required for people who have celiac disease.

Celiac disease is an autoimmune condition in which the gut becomes inflamed in response to gluten.

Because gluten may also be linked to a few other diseases and symptoms, some people without celiac disease may feel better if they avoid gluten (59).

That being said, gluten-free breads, muffins and other baked goods are not typically low in carbs. In fact, they often contain even more carbs than their gluten-containing counterparts.

What's more, the flours used to make these foods are typically made from starches and grains that tend to raise blood sugar rapidly (60).

Sticking to whole foods or using almond or coconut flour to make your own low-carb baked goods is a better strategy than consuming processed gluten-free foods.

BOTTOM LINE:Gluten-free breads and muffins can be as high in carbs as traditional baked goods. They're also often made with carb sources that raise blood sugar quickly.

When following a low-carb diet, it's important to choose foods that are highly nutritious, yet low in carbs.

Some foods should be minimized, while you're better off avoiding others altogether. Your choices will depend in part on your personal carb tolerance.

Can you eat eggs on a low carb diet?

C.E.O DR. EVANS KAMURI CALLS ON EMPLOYEES TO BE THEIR BROTHERS’ AND SISTERS’ KEEPERS.